For the past year, I’ve been keeping a secret. None of my family or friends know I’ve been struggling with extreme fatigue. The exhaustion has been debilitating, so much so that I’ve silently worried my cancer may have returned. The gray winter days haven’t helped. The cold  coupled with my exhaustion has only made me want to slide deep under the electric blanket and hibernate. Truth be told, I’ve been a couch potato for months. I’m sure there’s a permanent “behind” shaped depression in my recliner and the writing on the TV remote has practically worn away from use. I knew this was not healthy. I knew something had to change, but I didn’t feel like doing anything. I knew exercise was supposed to be a healthy thing to do, especially under my circumstances. I’d done a lot of reading, after all, I’d been doing a lot of sitting and reading is easy to do while you sit. I’d also done a lot of surfing the internet. It doesn’t take much energy to lift a finger or two.

According to an article on the Breastcancer.org website, exercise is an important part of being healthy. Current research shows that exercise can not only reduce the risk of breast cancer recurrence, but it can also reduce the risk of developing breast cancer for those never diagnosed.  In another article, "Several recent studies suggest that higher levels of physical activity are associated with a reduced risk of the cancer coming back, and a longer survival after a cancer diagnosis," said Kerry Courneya, PhD, professor and Canada Research Chair in Physical Activity and Cancer at the University of Alberta in Edmonton, Canada.

When it came time to flip the page on my calendar to January this year, I made a conscious decision to do something about my poor, pitiful self. I didn’t want to be lethargic. I didn’t want to keep on struggling with fatigue. I REALLY didn’t want to exercise, but I knew it was exactly what I needed to do so I set a goal. My goal was to find a way to exercise at least 45 minutes every single day until my next appointment with the oncologist. I found a countdown app and installed it on my iPhone. Then I entered the date of my next appointment. It was exactly 3 months away, 90 days. I found another free app, a daily fitness diary, and added it to my phone. I went to my closet and pulled out a pair of spandex exercise leggings I’d tucked away from my before cancer days along with my well-worn running shoes. Don’t get the wrong idea here! I have never been a fitness addict. I’ve tried and failed more times than I could count but the important operative here is I tried. Next I set the alarm on my phone for 8:00 a.m. the following morning. Come hell or high water, I was going to make myself get up when that alarm sounded, get dressed, and exercise for the full 45 minutes whether I wanted to or not. I felt good about my decision. I was equipped. I was mentally ready. I walked back to the living room and planted my behind with plan in mind. Picking up the remote, I flipped on my favorite afternoon show.

The following morning, when the alarm sounded, I moaned. I had good intentions. I wanted to do this but it was hard. I made myself get out of bed, partially because I knew this was part of my plan and partially to shut off the phone alarm. (I’d made a point to set it on the dresser across the room so I had to get up to turn it off.) Now that I was vertical, I knew it was time. I walked to the closet and picked up the outfit I’d laid out the previous day. The spandex pants felt snug against my skin, a little more snug than I’d remembered. I grabbed a sweatshirt, slipped on my shoes and walked toward my treadmill. No one would know if I turned around and went back to bed but I didn’t. I fought the urge to veg and made it to the treadmill’s side. I stood there for a few minutes looking at this huge, ugly behemoth. It seemed to be gloating with its big red eye, the power button. I could almost hear it laughing hysterically as I lifted my foot to place it on the conveyor belt... “Really?” it seemed to hiss as the belt started to turn.

I plugged ear buds into my ears to drown out the sound of the constantly turning noise. I couldn’t bear to hear the treadmill’s mocking. I cranked up the music and began to walk slowly to the cadence I’d set. It was just a notch above the lowest setting. I needed to start out small and work my way up. I’d been sedentary for such a long time, I wasn’t sure who I was fooling, the treadmill or myself.

I walked at 1.9 miles an hour for fifteen minutes. It was super slow. I didn’t even have to struggle to breathe but at least I was moving. That wasn’t so hard, I thought to myself, as I bumped it up a notch and set the treadmill at 2 mph. Another fifteen minutes passed. Wow! I’d already been on this thing for 30 minutes. It hadn’t been too difficult to put one foot in front of the other and listening to the music had helped keep my mind off of the fact that I was exercising. Since I’d set my goal for 45 minutes per day, I only had fifteen more minutes to go. I knew I could do it. I increased the incline on the treadmill a little and added another mile to my speed. When the alarm on my phone signaled I’d completed 45 minutes of walking, I smiled. I’d done it! I’d completed my goal.

Turning off the treadmill, I climbed off and smacked it on the side. Ha! You thought I wouldn’t do it, I whispered, I fooled you. As I walked back into my living room, I noticed I had a little more pep to my step. I wasn’t quite as tired as I usually was this time of day. Could it be that the small amount of exercise had helped? I was perplexed. It didn’t make sense. How could making my body move when it was too tired to move make me feel better? It seemed it would only make me more tired but that was not the case!

Throughout the remainder of the day, I found myself rising from a sitting position to walk across the room for one thing or another. My behind wasn’t glued to the chair as it had been. When I needed something, I didn’t ask someone to hand it to me. I got up and got it myself. I was thankful to have a little more energy and noticed I wasn’t feeling quite as exhausted as I normally did.

The following day, when the alarm sounded, I quickly dressed and made my way toward the treadmill. I was actually looking forward to knocking out those 45 minutes. This time, instead of listening to music as I walked, I’d loaded a book to listen to and boy did the time fly. The time passed so quickly, I barely noticed as the alarm notified me it was time to stop. I could have kept going.

Although it’s only been a short while since I set my goal toward revitalizing my health, I can already tell it’s working. Not only has my energy level improved, I’m sleeping better, too. I really feel like I’m doing something proactive for my health now. Yes, it was hard to make myself get moving but after I started, it really did feel good.

My oncologist says obesity is detrimental to women who’ve had breast cancer because fat cells produce Estrogen and Estrogen feeds some types of cancer. Since my cancer was ER/PR+ and Her2Neu-, I want to make sure to eliminate as many fat cells from my body as possible. One way I can do that is to watch what I eat by making wise choices. Instead of eating unhealthy, sugary sweets, I choose fresh fruits and vegetables. By eating less and moving more, I can’t help but lose weight so that’s my plan.

Setting the goal to get up and move was a good one for me. It’s really just a mind over matter concept and I’m sure there are hundreds of witty weight loss clichés you could apply here, but the point I’m trying to make is the best weapon I’ve found to fight fatigue is exercise. Of course, it’s important to consult a medical professional before beginning any exercise program and each situation has to be carefully considered. 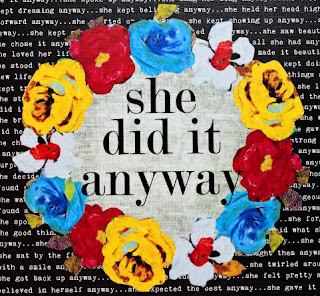 If you’re struggling with post cancer related fatigue like I have been, you might want to give exercise a try. There’s no need for fancy equipment. Even if you can only take a few steps around the room, you’re making a conscious decision to move your body. Fatigue doesn’t have to be permanent. Little by little, we can fight to gain back as much of our energy as possible.

I’ve made a commitment to do this for the entire year. There will surely be some days when I just don’t feel like doing it, but I’m going to push through and do it anyway. That’s really the bottom line, isn’t it? She did it anyway. Because that’s the way we are…we’re fighters. We’re strong and courageous women and we don’t go down without a fight. So stop gloating, treadmill…you in the corner with your big red glowing eye. You might think you’ll sit there unused but I’m going to walk all over you and when I’m through, you won’t be laughing any more.
- January 17, 2017

If anyone had to sum up my life in 4 words, they’d either choose the phrase, “She loved the Lord, or “She was a planner.” And while both of ...