It's been a while since I've written in my blog again...I apologize to my faithful readers. My intentions are good but my life is busy.

Four years ago, I wouldn't have thought I'd be as busy as I've become. Back then, I was at the beginning of my breast cancer battle. Today, I'm doing well and my busyness has increased exponentially. Of course, if I'm honest, I'll have to admit most of the busyness if of my own doing. I'm currently writing my book, writing for a cancer magazine, working on a zillion different art projects, and I've just started a Facebook group for women! I don't know why I always feel the need to stay busy but I do. Some days there just aren't enough hours in the day for all I want to do, and that, my dear friends, is why I haven't been on here.

On top of all my physical busyness, I'm been in the midst of emotional busyness. Most of that stems from burdens many of my family and friends are facing. I spend an awful lot of time on my face before the Lord. There's just so much to pray about...

Today, as I was praying, I was reminded of one of my favorite childhood stories, B'rer Rabbit and the Tar Baby. This is part of the Uncle Remus series written by Joel Chandler Harris. In today's world, even discussing the story of the Uncle Remus books would probably be unacceptable because of racism and hatred but I happen to love the stories! They were a vital part of my childhood back in the early 60's. Back then, things were easier, especially when you grew up in a home where people weren't focused on the color of someone else's skin. 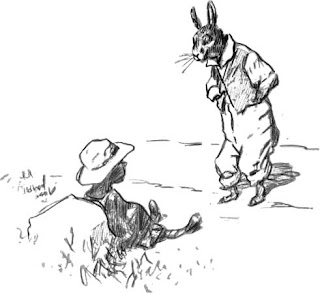 If you've never read the story of B'rer Rabbit and the Tar Baby, let me give you a brief synopsis: B'rer Fox and B'rer Rabbit are arch enemies and are always looking for ways to get back at each other. Well, in this story, B'rer  Fox, still smarting over being fooled again by Brer Rabbit, mixes tar and turpentine to make a tar-baby. He sets his creation, which indeed looks like a little black figure wearing a hat, beside the road and hides himself in the bushes not far away. Soon Brer Rabbit comes walking down the road and stops in his tracks when he sees the tar-baby. He speaks to it, asks it questions, accuses it of being hard-of-hearing and impolite, and finally yells at it. The tar-baby, of course, says nothing, and Brer Fox stays hidden in the bushes, chuckling quietly to himself. Losing his temper, Brer Rabbit hits the tar-baby, first with one fist, then the other. With both hands stuck in the tar, he kicks it with both feet, getting them stuck as well. In desperation, he butts it with his head, which also sticks firmly in the soft tar. Now Brer Fox emerges from the bushes, laughing so hard at Brer Rabbit’s plight that he rolls on the ground.

Tar babies are sticky! Could you imagine that poor rabbit stuck slap dab in the middle of all that icky tar? I'm sure he learned a valuable lesson and that is, if you lose your temper and get angry, sometimes you get into a jam. But I think there's another story here, one even more important.

Do you know any tar babies? I mean those people around you who seem to be so weighed down with burdens and problems that you just seem to avoid them? Oh, sure! You might listen to them as they tell you what's going on in their lives and you might even offer to shoot up a quick prayer for them but other than that, you can walk away unscathed. No tar on YOUR hands! But have you ever thought that sometimes, God puts people with problems in your path because there's a lesson you need to learn? Just like B'rer Rabbit, there just might be something there you need to take away?

Right now, I have several friends who are dealing with an awful lot in their lives. They're struggling with sons or daughters who have big problems and they don't know quite how to help them handle those sticky issues. I also have some family members who are struggling. Their pride has put up some big walls and they don't want anyone to interfere, even those well-intentioned folks who just might want to do anything they could to help. So what do we do in situations like that?

The tar babies might not be visibly covered in thick, black material but if you look closely enough, you can see sticky problems all around them. If you get too close, you just might get a little dirt on you. Most of those people are broken. They want someone to come and help bear some of their burden and if we're doing the Christ-like thing, that's exactly what we'll do. We'll stick our hands right into their sticky mess and get dirty...we'll get really dirty! In Galatians 6, we're told that we are to not only get dirty, but we're to pick up that sticky mess and carry it! We're to bear each other's burdens and in doing so, we fulfill the law of Christ.

If we walk away from those tar babies in our lives, we're committing spiritual snobbery! We all have problems and "dirt." One day, that tar baby's shoe might just be on our foot.

If there's someone in your life that's weighed down with sticky problems and burdens, you may not be able to physically help them but you can certainly pray. In so doing, you're helping to carry the load just a little. And if you get a little dirty, won't it be worth it?

Thank you, Uncle Remus, for teaching us so many lessons through your stories. Thank you, Joel Chandler Harris, for having the imagination to write those stories! And thank you, Lord, that you've give  us all the ability to bear one another's burdens if we'll just be on the lookout for people who might be covered in a little tar.
- April 25, 2018 No comments:

It's difficult to keep up

It's been a while since my last post. I don't mean to have such large gaps between writings but sometimes, life just happens. We all get busy. We all get distracted. And some of us, the ones of us who have a little touch of adult ADD or adult ADHD, can't seem to stay focused. Whatever the case may be, I've been sidetracked.

For the past month or so, I've shifted my focus from writing to painting. It's been wonderful therapy and the art has given me such a lovely distraction that I haven't been able to stop. Can you be addicted to painting? Perhaps. I like to imagine Van Gogh or Picasso were addicted to their craft. I am by no means in their league. I'm far from it, but I have found a medium that lends itself to rapid results and a confident satisfaction.

It's hard to have so many hobbies. I enjoy every single one. That's a good thing because when I tire of one, I can easily pick up another. I tired of things quickly. That's one of my flaws. Today I'm going to try to regain some semblance of normalcy and shift myself from the world of painting back into the world of writing.

Sometimes it feels like I have a smoldering fire within me. It's a burning desire to write. Often, when I don't let the words spill out, they bottle up inside me and I feel like I'm about to explode. This is when I can understand the madness some famous authors experienced. And it seems rather odd that people with such creative minds could fall into the trap of madness, doesn't it? Unless you've felt the overwhelming power of need, there's no way to understand this concept. It is real. And sometimes, I feel quite mad.

My book has been calling. I've put it on the back burner for some time now. For some reason, I just couldn't get past chapter 4. Hopefully, I'll make some progress today as I pick it back up and re-read it.

On another note, I've been invited to attend a Relay for Life celebration for breast cancer survivors. Reluctantly, I accepted the invitation. I'm not too keen on big to-dos like that but felt it my obligation to participate. This year marks my fourth of being cancer free so there's definitely reason to celebrate.

Breast cancer has finally been relegated to the back seat of my life. It no longer dictates everything I do and I'm thankful. It seems I'm finally being able to just focus on living. And speaking of living, I'm so excited about an upcoming trip. It's been in the works for many, many years. Lord willing, this October I'll be out of the country. More details to come!