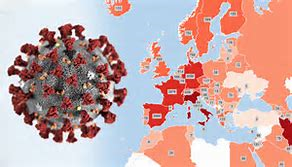 Since the Corona Virus came to town, everything has been weird. Nothing makes sense. Overnight people got sick as the virus spread. And then some began to die. That's when the President decided it was serious. He closed our borders.

We watched the news listening intently to reports on China. My heart went out to those dear people. I'd been there. I had invested time in the lives of many students there when I had the opportunity to spend time teaching them English as a Second Language. It was hard seeing the devastation.

Emotions were on edge. Along with the fear at it reaching our country, many were angry at China. Many conflicting reports made wild insinuations. We had no idea what was really true and what wasn't. We were in the dark.

And that's when many of us grew to know a new normal.

As a survivor of breast cancer, my first time hearing the words "new normal" were as I'd completed treatment. Several of my "pink sisters" told me I'd soon face a different world, a world where nothing was familiar and everything had changed. They were right.

It didn't happen all at once. It happened slowly, but over time, I learned to adapt and adjust to being a breastless woman. I learned to navigate a world of pink, a world of learning unfamiliar medical terminology, feeling like a human guinea pig as I endured treatment, the ugliness of mastectomy bras, prostheses, lymphedema and lots and lots of bills.

I had many ups and downs, and still do. It's hard adapting, but I do it because I have no choice. I want to live and this is the lot I've been given, so I heed the words of a wise sage who once said, "Suck it up, buttercup!"

When television reporters and newspapers started to use the familiar cancer terminology, I felt a little betrayed. New normal belonged to breast cancer, not a paranoid world of people fearing a contagious virus. But somehow, the phrase stuck and media outlets are using it often. Oh well. Those of us who've been through breast cancer know what new normal really means, it means a whole lot more than what the general public think it means.

The current new normal revolves around lots of hand washing, disinfecting, sanitizing, and social distancing (another new terminology thanks to the Corona Virus). Businesses have been forced to close, the stock market is unstable, people are filled with fear and rightly so. No one wants to die.

But the President has a plan to boost the failing economy. He's presented a big stimulus package that will give adults in our country a check. People are happy about that. But it's a bandaid that won't really fix the problem. The new new normal will probably be around for a while.

If you ask a breast cancer survivor how she feels about all this, you might be surprised at the many different answers you'll receive. Each of us has a different perspective. But since this is my blog, I'll give you mine.

I think we learn to adjust and adapt. Humans have an innate will to survive. We do what it takes, always have, always will. And those who choose not to usually don't make it, although some don't have a choice, especially where cancer is involved.

Those of us who've survived cancer know what it takes to embrace change. We do it second by second each and every day.

I hope our country takes their new normal seriously and maybe, when things calm down a little, they'll pay more attention to the next person with cancer who tries to explain what living life post diagnosis feels like.

And that's all I've got to say about that.