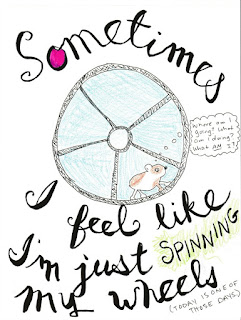 Ever have a day where you just feel like you're spinning your wheels? It seems lately all of my days are going that way. I wake up with good intentions and a list of projects in hand but as the day goes on, I end up accomplishing nothing. My inability to focus is scaring me. I flit from one thing to another continually. The smallest of things overwhelms me. Take my email inbox for example.

Today, I sat down at the computer after failing to complete several other tasks. My one goal was to clean out my email inbox. When I opened up my Gmail account, I was overwhelmed at the amount of mail in each of the three categories - primary (where my important mail resides), social (where YouTube subscriptions, etc. reside) and promotions (where most of the unsolicited junk mail resides).

As I stared at the folders and the amount of mail in each, I felt frazzled. In the first place, how did I get so many emails in one day? It was insane, so the first thing I did was delete everything in the promotional folder. I didn't bother to read a one, just hit delete. Poof! They were gone. That felt better. Then, I was on to the social folder.

Those took a little more time. I wanted to glean emails I wanted to keep, so I had to go through them one by one. After doing that, I deleted the rest and made a mental note to unsubscribe from as many as possible tomorrow. I couldn't handle it today. Tomorrow would suffice.

On to the primary emails. These were the priority. These would need careful attention. I didn't want to accidentally delete any of the ones I needed. As I worked through them and read or deleted, more would pop up. It seemed they were coming from out of nowhere. How could I feel ambushed by something as simple as email? That's when it hit me. I'm suffering from post cancer PTSD.

For some time now, I've been struggling in different areas. Loud noises, sudden movements, and unexpected changes freak me out. I don't like feeling this way. I've always been one to be in complete control. Some days are worse than others, but it's definitely problematic. When I return to the cancer treatment center for my next checkup, I'm going to mention these issues to the doctor. Hopefully, he can recommend something to help.

I can't keep going like this, spinning my wheels and getting nowhere. It just won't do.

It's so hard to understand 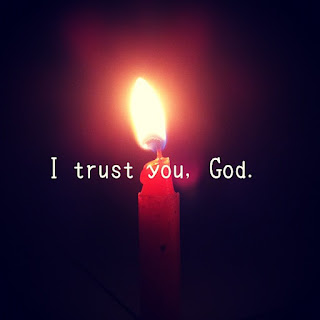 My inbox was full of messages. As I was going through the process of deleting the unnecessary ones, one in particular caught my eye. It was an update from a pink sister. I'd subscribed to her blog and she's subscribed to mine. We tried to keep up with each other and often compared stories. We were both diagnosed in the same year. We both had the same type and same stage cancer.

At first, it was comforting to know we were in the fight together. At each small success, we encouraged and cheered each other on, but recently, things have changed. Her cancer has progressed. She is now stage 4 and as far as I know, I still remain stage 2B.

This week, she'll start again with chemo and radiation. The treatment will be aggressive. She's scared, and rightly so. I'm scared, too. The prognosis doesn't sound good.

It's so hard to understand how two people, with such similar health diagnoses, can have such different paths. We're both Christ followers and have trusted Him to guide us on our journeys. And while we may not always understand His ways, we know He is Sovereign. He has a plan and a purpose for each of our lives. He works all things out for our good, even painful trials like cancer.

My heart hurts. One friend is nearing the end of her journey and another is just beginning hers. On February 11th I'll find out where I stand. Would you please say a prayer for J, M, and me? We sure could use your love and support.

Cancer is such a difficult trial. We still hope for a cure. Perhaps one day, there will be one. 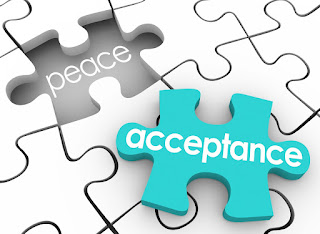 She reached out via Facebook Messenger, this friend I'd met last year. We'd bonded during our trip to Israel. I'd come to love and respect her. We just clicked.

But when the news came, I wasn't expecting it. She had just been diagnosed with breast cancer. What could I say? What could I do?

I didn't want to discourage her by sharing my story, but I wanted to let her know I cared. Instead of offering my heartfelt sympathy, I typed four words, "I'm here for you."

And that was that.

In the next few days, she'll meet with the surgeon to discuss her options. I'll be praying for her to have wisdom. And if she reaches out again, I'll be there, to offer love, support, and comfort.

The hard will come, I know it. She doesn't know about the hard yet, but soon she will. 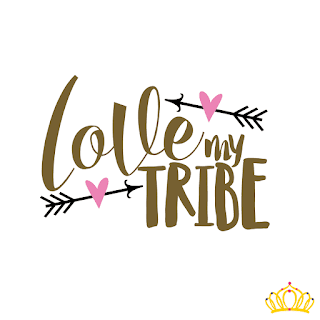 After I was diagnosed with cancer, I felt alone and lost.  It didn't feel like anyone truly understood what I was going through. Oh, my family and friends did their best to offer their love and support but they just didn't get it. There was no way they could truly understand what cancer felt like because they hadn't gone through it themselves. I needed a tribe, a group of women who understood. A group of women who would be willing to accept me just as I was without needing me to pretend to be someone I was not. And so, I went in search of them.

I got on the internet and joined several breast cancer support groups. There were so many and I wasn't sure which ones were better than others, so I randomly selected a few. As I began reading the posts submitted by members, I was surprised. There were women who were feeling the exact things I was feeling. There were women who were struggling to find their identity. There were women who were overcome with emotion at having to fight a battle they never intended to fight. These women got it! Though they had never met me, they were embracing me with virtual hugs and love. It was so nice to be understood and to think, these complete strangers were being so kind to me and so welcoming, it was indescribable.

But some of the groups were filled with negativity. I tired quickly of reading their rants and their complaints so I left those groups. I focused on the other groups for a while but when I found faith based groups, I dropped all others. It was comforting to share a bond with sisters in Christ. Not only could we talk about our breast cancer journeys, we could also talk about our faith.

In one of those groups, I "met" a woman who was willing to come to my house. She'd been diagnosed with breast cancer a few months before me and she wanted to help me understand what was ahead of me on my journey. I was so grateful for her willingness to help and we became fast friends until she moved farther away and our friendship dwindled.

But God brought other women into my life, more tribe members! I "met" other ladies through articles I'd written for a cancer magazine. The women reached out to me one by one. The contacts came through Facebook Messenger and most of the women wanted to learn about my experiences with alternative therapies for fighting cancer. As I shared my trial and error experiences, they wanted to stay in touch. We exchanged phone numbers, email addresses, and even physical addresses. Though most of the women lived out of state, we found a way to stay in touch. My tribe had grown and was flourishing!

Each one of these women have met a special need in my life. God knew exactly who to send and when. I may never have a chance to meet any of the newest members of the tribe in person, but hopefully they'll know how much I value their friendship.

In the breast cancer community, tribe is everything. Sharing our experiences, we also share a commonality that binds us tightly together.

I never thought I needed a tribe, but I've found I do. If I hadn't taken time to reach out and risk rejection, I would never have found acceptance.

Breast cancer has a way of stealing a person's identity but with a tribe of us, its often easier to understand who we are...we are strong and brave. We are warriors who don't give up or give in. We need each other to be reminded we're never alone.
- January 16, 2020 1 comment:

Could it be cancer?

Today I've had trouble breathing.  Just doing ordinary household chores has taken my breath away.  For the past few days this same thing has been happening.  I haven't mentioned my secret fear to anyone.  In the back of my mind, I keep wondering, could it be cancer returning?

Recurrences can happen anytime after a person is diagnosed, but since I'm a little over 5 years from my original diagnosis, I've felt like I was safe. But that might not be the case.

I have an oncology appointment in early February.  At that time, I’ll have routine bloodwork and see the doctor in the survivorship program.

It's always scary when I go for those annual checkups.  I try not to be fearful of the big "what if" but it's hard.  I don't know what I'll do if I ever face that day.

In the meantime, I'm going to listen closely to my body.  If I keep having those feelings of being unable to get enough air, I'm going to call and move my appointment up a few weeks.

Clinical trials are they worth it?

I have a friend who recently lost her husband to pancreatic cancer. Over the past year, I followed each event on his health care journey do...