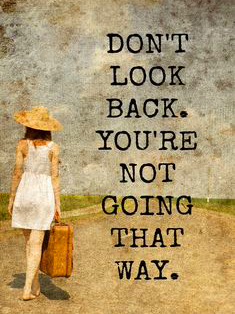 It takes a lot of strength to walk away from something without looking back, believe me, I know. This is a lesson I've learned the hard way. The fixer in me always wants to make things right and that has caused me to often look back on people, places, and circumstances.

In some instances, a brief look back was necessary to help me move forward, but in the majority of the cases, looking back only caused feelings of sadness, depression, or regret. And that's not a good thing.

I was watching a made for TV movie series the other day. In one particular scene, a criminal is working hard to prepare a bomb. As he works to connect various wires and things to a complicated apparatus, the camera pans out revealing the dangerous explosive is being placed inside an innocuous looking suitcase. Later, as the show moves ahead, we see the criminal placing the bomb laden suitcase in a very public place, just at the corner of a building. As he walks away, he tucks a remote control into his pocket and as an evil smile crosses his face. Viewers can only imagine what comes next. Inevitably, a well-timed explosion will occur. Lives will be changed in a split second. Some will likely die, and others will suffer bodily injury. But will the perpetrator look back to witness the damage? The camera doesn't reveal those details.

As I watched the show, I became engrossed. Sitting on the edge of my seat, biting my nails, I watched as one person and then another passed by the suitcase. None of the passersby paid attention to the abandoned luggage, and then, the screen goes into a tight shot. A small hand reaches down for the handle of the case just as the remote-control timer's numbers light up in red and we see the countdown begin, 03, 02, 01....

The next scene shows a crumpled little body amid a large pile of bricks and debris. Without having seen the event, one knows what happened. An evil intent had led to a malicious act which had, in turn, caused unnecessary, but permanent damage. It was nasty, heart wrenching stuff.

Those kinds of show make for good entertainment, but in real life, it's a very different scenario.

As I thought about the plot, I was reminded about a quotation popular artist, Mary Englebreit, once said, "Don't look back. You're not going that way." Wise words with intrinsic value.

Another writer, Paul penned something more detailed in the book of Philippians of the Holy Bible. In chapter 3, verses 13- 14, he says: "Brethren, I count not myself to have apprehended: but this one thing I do, forgetting those things which are behind, and reaching forth unto those which are before, I press toward the mark for the prize of the high calling of God in Christ Jesus." He was reminding us the importance of remembering not only who we are and where we were going, but whose we are and why we are on the journey in the first place.

It's easy to want to look back at devastating life events wondering why they happened and if there might have been anything we could have done to have prevented them but looking back on past events can't change them. It can only bring heartbreak and wondering. So why do we do it?

There's an old saying, "Curiosity killed the cat." Not put that saying in context with the bomb incident I mentioned before and you'll get a clear picture.

Often, God allows difficult and challenging things into our lives as part of His most excellent, perfect plan. Though we can't see or understand the entire picture at the time of the event, He knows exactly what is necessary to bring about the desired effects He chooses.

Perhaps He will use a life altering event to help change our current course, moving us forward onto a better path. Though we may not understand, we must trust His Sovereignty.

In almost 65 years of life, I've learned the importance of choosing not to look back. The lessons haven't always been easily learned. In the past, when I've glanced backward, I've often had to dodge a sharp piece of shrapnel, one of God's gentle reminders that I needed to leave well enough alone, to let bygones be bygones. When I've been obedient to walk away from dangerous or volatile situations, His hand of protection has covered me and guided me forward. When I've refused to heed His command and have chosen my own way, I've often been burned and have had to learn a very difficult lesson the hard way.

I guess that's why He never gave us eyes in the backs of our heads. If He had, we'd constantly be looking backward! I'm thankful for His constant hedge of protection in my life. I hope you'll choose to keep your eyes forward, too. That way, you won't be tempted to glance back. Just remember, you aren't going that way.