Sometimes I just want to pull my hair out 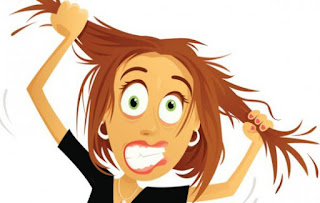 Sometimes I just want to pull my hair out, especially when I read a friend's blog post and I just can't wrap my head around it.

This morning, I was reading a post from a fellow breast cancer survivor. She said her cancer has returned and is growing in her spine. As soon as I read the words, I burst into tears. I just didn't understand! We'd been diagnosed with the same type of cancer in the same year. How could it be that her cancer had returned and mine had not? And what made it even more difficult to understand and accept was the fact that she'd chosen to go the traditional treatment route. I'd opted not to do that. She'd endured chemotherapy, radiation, and the anti-hormone therapy afterward. I'd refused chemo, had done 28 rounds of radiation, and had only taken the anti-hormone drugs for a couple of months. It just didn't compute and it certainly didn't seem fair.

But that's what sucks about cancer. It doesn't follow the rules. It makes its own rules as it goes along. It morphs and changes and there's not a darn thing any of us can do about it. Even with treatment, there are no guarantees. And without it, you just never know...you may survive and you may not. It's just a crap shoot.

So what can we do to better our odds? Naturally, I want to say we should do everything within our power to stay healthy. We should eat right, exercise, get plenty of rest, and try not to stress but that doesn't always work.

And how do I console someone who's living my worse nightmare? I can say I'm praying for you or I'm so sorry to hear your news, but what will that change? It won't take away their pain. It won't lessen their fears. It might exacerbate things and I don't want to be the one to do that. So I'll do nothing but empathize, cry silent tears, and scream words that don't make sense, like WHY????

My heart hurts for her. She's fighting so hard but it seems like a losing battle, and yet...she still fights. I know she's doing it for her family. She has small children and an adoring husband. She wants to do this for them. She's so brave.