How many nurses does it take to draw blood? 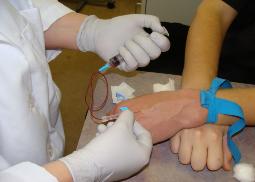 When I entered the doctor’s office, I was met at the door by a staff member thermometer in hand. After scanning my forehead, I was asked to sit in an unoccupied corner of the office. I noticed there was only one other patient in the waiting room, a gentleman also wearing a mask.

I sat for about fifteen minutes before being called back to have my vital signs taken. After weight and blood pressure were recorded, I heard a slight knock at the door. Giving my approval to enter, a slight woman came into the room.

She leaned toward the center of the room and extended her hand offering a fist bump. I’d never experienced that before, especially by the gloved hand of a doctor.

We sat and talked going over my medical history. She entered information into the computer via a digital voice device allowing her to speak rapidly and make changes on the fly. After about fifteen minutes, she asked what type of insurance I had. I responded, “Blue Cross, Blue Shield.” She smiled and said, “Good. They will allow me more time for this exam. Many other insurance companies limit my time and I plan to take a good bit of time with you since you’re a new patient.”

“Okay,” I thought, “Does that mean she’s going to overbill the insurance company of is she really going to spend more than fifteen minutes with me?”

She continued talking a while and then said she wanted me to have bloodwork done. We walked toward the lab as she explained what she wanted to the technician.

This was the part of the office visit I dreaded. Just knowing I’d have to go through the whole routine of explaining about my lymphedema and why I couldn’t have blood drawn in the normal fashion bothered me. Phlebotomist always balked when I told them I had to have my blood drawn from my hand. They didn’t like doing that. I guess because the veins there were so much tinier than other places on the body, but I didn’t care. It was my body and I was not about to put myself at risk for cellulitis.

The first technician was a young black girl. Pulling out a butterfly needle she proceeded to jam the needle under the skin in my hand. I winced with pain and she said, “Oh, I’m sorry, did that hurt?” I wanted to scream, “Are you kidding me?” but didn’t. She knew it hurt and I think, in some sadistic way, she enjoyed watching me flinch.

When she couldn’t get the blood into the needle, she withdrew it and said she was going to try again. She didn’t ask my permission, just rammed the needle in a new spot missing the vein again. I was starting to get angry but extended grace and allowed her to try one more time. Still no luck.

At that point, the doctor entered the lab and asked what was taking so long. When I explained the tech had tried 3 times to get my blood but couldn’t, the doctor got upset and told the lab tech she was never to stick a patient 3 times for blood that she should have called another staff member for help. The young black girl left the room and the doctor called in someone else to try.

An LPN tried to draw my blood but after 2 more sticks was unable to do it. She was frustrated and so was I. So far, 5 sticks. This nurse apologized and told me she knew who could get the blood. She called a receptionist named Kim to come and help. “A receptionist?” I thought, “How odd.”

The receptionist’s name was Kim. When she came in, she got a new butterfly needle and gently inserted it into the top of my hand. On the first stick, she drew blood. I was so happy, but the happiness ended quickly as the blood stopped flowing.

Taking another butterfly needle in hand, she moved over a half an inch and gently slid the needle under my skin. I barely felt it and watched in amazement as the blood began to flow. The LPN was standing close by and said, “See! I told you she could do it. That’s why we call her the vein whisperer.”

I was thankful when the last lab tube was filled with blood. My poor hand was starting to throb and bruise from all the needle sticks.

The doctor came in just as they were finishing and said she’d have to complete my exam in the lab room because all of the other rooms were full and they were trying to keep patients separated due to the social distancing rules.

When she had completed her exam, I was told to schedule an appointment for 3 months. I walked up to the receptionist’s counter and waited behind another patient. When it was my turn, I was told my next appointment would be conducted virtually.

As I walked out of the office, I adjusted my N95 mask. The straps had made a groove in the side of my face and I wanted so badly to remove it.

When I got to the car, I took it off and was glad to be in a safe environment. I couldn’t wait to get home and put ice on my hand. 7 needlesticks and 3 staff members to get 4 vials of blood, ridiculous!