Crafting can be dangerous! 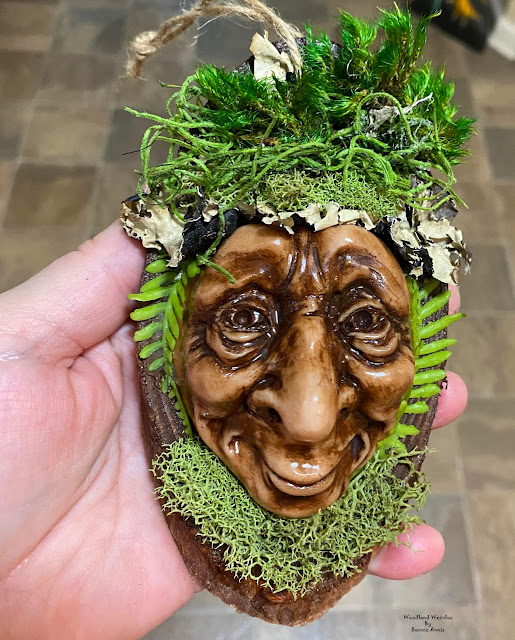 Anyone who knows me knows I love crafting. To date, I haven't found one I didn't like. This week, I've been playing with polymer clay and have had fun creating a new line of creations I'm calling "Woodland Weirdos" for lack of a better name.

Yesterday, my morning started early. After a cup of cappuccino, I pulled out my duffle bag of goodies and got busy. In front of me was a huge stack of clay, a pasta machine, some wood slices, twine, superglue, glue gun, gluesticks, paint, stain, and a bunch of moss. What in the world could I do with all of that? As I was thinking the creative juices started to flow.

First, I conditioned the clay. Running it through the machine, I watched as the hard, dry clay became soft and supple. It reminded me of Scripture - He is the potter, we are the clay.

When the clay was workable, I began to shape and mold it. I wanted to do something unique and interesting. As I pushed and pulled the clay, I began forming a face. Wanting to give it character, I stretched the nose and pushed up the cheekbones. When I'd gotten it as I wanted it, I took a dowel and formed the pupils in the eyes. I stood back and looked. I was pleased. (Which also made me think of Scripture and how God must have felt right after He'd formed creation, "...and it was good.")

Placing my little old man face on a sheet of wax paper, I popped him into the toaster oven and baked him for about 40 minutes.

After he was cool enough to touch, I opened the bottle of stain and worked it into the crevices I'd created in the clay. The dark brown stain sunk in quickly and revealed the detail of the facial lines, exactly as I'd wanted.

Later in the day, after the stain had dried, I polyurethaned the clay and let that dry about an hour, then the fun began.

I wanted to adhere the clay face to one of the wood slices. In order to permanently adhere it, I needed to use a strong glue. A glue gun would provide instant adherence but I knew from past experience it could soften and melt in heat or even pull off in extremely cold weather. Since my little guy was doing to be an outside decoration, I had to opt for the superglue.

Pulling off the cap of my superglue gel, I carefully squeezed out a few drops on the back of the clay face and quickly pushed and held it onto the wooden disk. The instructions on the glue said it would take about a minute to completely adhere, so I sat and held it tight.

A minute later, I held up the wood and shook it to see if the face would stay in place. It did and I was happy. On to embellishment...

I needed to give my little man more character and interest. Looking at my pile of goodies, I came up with an idea. I'd make him a woodland creature, a woodland weirdo!

Taking bits of moss, I began to glue and build, but unbeknownst to me, some of the glue inadvertently got on my index finger. And then, I touched that finger to my thumb. BAD NEWS! My finger was glued fast to my thumb! What to do, what to do???

I tried to pull the digits apart quickly, to no avail. They were stuck and stuck good. The superglue worked amazingly fast on human flesh.

I asked Siri to find out how to remove superglue from flesh and He said (I have an Australian male Siri because I like his voice) to use nail polish remover.

I knew, under my bathroom cabinet, there was a partial bottle of nail polish remover. I couldn't remember if it was the non-acetone kind or the acetone kind. I hoped and prayed it was full acetone because that would be the only way I could dissolve the superglue.

Thankfully, the bottle had about a thimble's worth of acetone in it and it was just enough to unstick my stuck finger and thumb. Boy, was I glad!

I continued working and created a dozen Woodland Weirdos. I had such fun forming and decorating each piece.

As I looked over my work, I thought to myself it was time to reopen my Etsy shop. I'd closed it early last year when I got tired of posting and selling art, but I thought their might be a market for something cute and creative like my weirdos so I just may put them online to sell.

Art has been wonderful post cancer therapy for me. When I'm creating, whether it's painting, writing, or doing some sort of craft, I don't think about how much my back hurts or how depressed I might feel. It's been a true blessing and I'm so thankful God has given me the talent to do the things I do.

I did learn a valuable lesson while creating my weirdos, and that is to respect the superglue! It does a wonderful job for providing quick crafting adhesion, but it also does a great job of sticking skin to skin.

In the future, I think I'll choose another glue. Superglue is too dangerous for me. That's my story and (pun intended) I'm sticking to it.