I’ll never forget my eight-grade year of high school. It was such a pivotal year for me. I’d just become a teenager and had entered the world of exploring my independence. It was an amazing school year. Most of my friends and I had known each other since first grade. We’d attended the same elementary school and were so excited to be leaving Indian Creek. We thought we were hot stuff but had no idea what who we were or where we were headed.


My first year of high school was scary. I can still feel those feelings of anxiousness as I wandered down those locker lined hallways. I was a tiny minnow swimming upstream in a sea of hormones. But those scary feelings didn’t last long. Soon I learned my way around the school and began to settle into a comfortable routine.


Not long after I’d memorized my class schedule, I began having strange stomach pains. All through the school year, I struggled with extreme nausea and a feeling of something being not quite right in my belly. My mother thought it was just nerves and encouraged me to push through the pain, which I did for many weeks, but soon the nausea was accompanied by vomiting and the pain grew worse.


Realizing I wasn’t feigning illness to get out of classes, my mother took me to the doctor. After running a battery of tests, it was determined that I had a viral infection. We were sent home and told the infection should clear up in a few days, but it didn’t. Things continually got worse. I think my parents really started to worry when I was unable to keep food down and I’d cry myself to sleep at night as the abdominal pains wracked my body.


Somehow I managed to complete the eighth grade but I was still very ill and we had no idea why. One doctor after another was consulted. My mother was told I had mononucleosis and I was sent home to rest. When nothing seemed to help, I was taken to another doctor who thought I had Hepatitis. That diagnosis involved my entire family who had to endure preventative shots but that diagnosis turned out to be incorrect, too.


I wasn’t getting any better, in fact, I was growing much worse. At that point, my mother decided to take me to see a gastroenterologist. Upon physical examination, he could find nothing wrong. But after several visits to see him, this old country doctor had an idea. He told my mother to take me out a very greasy meal. Both she and I looked at him like he was crazy but he assured us he knew what he was doing and that we needed to trust him.


Mama took me to Matthew’s cafeteria to get a big ol' plate of fried chicken. She’d been told to allow me to eat the food and then bring me right back to Dr. G’s office. Shortly after consuming the chicken, I became deathly ill and was doubled over in pain. In the doctor’s office, I sat on the exam table as he palpated my abdomen. He looked at my mother and said we need to do emergency surgery. Both she and I were dumbfounded.


Dr. G explained that I had gallstones and that my gallbladder was severely inflamed. This was a rare condition for a thirteen year old to be facing, Dr.G said, and that’s one reason it had been so difficult to diagnose.


I was admitted to the hospital the following day and before surgery could be performed, my gallbladder ruptured allowing dangerous gangrene to spread through my body. I didn’t know it at the time, but I almost died. Dr. G told my mother if they hadn’t had a cancellation, which allowed my surgery to be moved up an hour, I would have died.


It was touch and go for many days, but they finally got me stabilized and I was able to go home with a foot long scar and a drainage tube in my belly.


Recovery was tough and I spent the summer recuperating at home.


When it was time for me to start 9th grade, I was still weak and the doctor felt I needed to continue gaining my strength back before returning to school. That meant I would have to be homeschooled so I could keep up with my classmates. Teachers at the high school were notified and a plan was made. The teachers would write out weekly assignments for me, my mother would go to the school each week to pick them up, and the following week we’d submit my work for grading. This plan worked well with most classes and I was thankful to have the opportunity to recover at home.


One day, my Home Economics teacher, Mrs. Sara Lou Jenkins, decided to make a home visit to see how I was doing. She’d called the house and asked my mother if she could stop by after school that day. I was nervous about the visit because I’d never met Mrs. Jenkins before but I was also looking forward to visiting with one of my 9th grade teachers.


Mrs. Jenkins rang the doorbell as Mama was getting supper ready. We were going to have fried chicken, something I hadn’t been able to enjoy in quite a long time. Since Mama had flour on her hands from dredging the chicken, she asked me to invite Mrs. Jenkins in.


When I went to the door, I found a slight little bird-like woman standing in front of me. She was in a 1950's style dress with a string of pearls around her neck. I noticed her perfectly coiffed hair and her earrings that matched her necklace. Inviting her into our home, I led Mrs. Jenkins into our living room. She sat on our sofa and began to chat with me. Mama leaned her head toward the living room from the doorway of the kitchen telling Mrs. Jenkins that she’d be available to visit in just a few minutes. She explained she needed to wash her hands first. 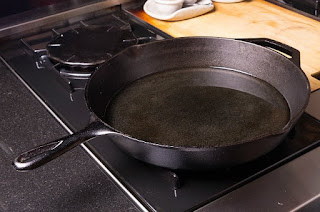 Mama joined Mrs. Jenkins and I as we conversed in the living room. Mrs. Jenkins asked about my health and how I was doing with my assignments. We talked for about ten minutes and then we noticed smoke and a loud pop coming from the kitchen. Mama and Mrs. Jenkins rose at the same time as Mama ran into the kitchen. I was right behind them. Flames were licking the cabinet above the stove as the grease Mama had put into the iron skillet on the stove burned. Mrs. Jenkins was frantic and called out to Mama ways to put out the fire. “You can douse it with flour or throw the lid on the pan,” she cried out in a shrill voice. “Mercy, you have to get that fire out fast!” she screamed. Mama was busy grabbing a towel and trying to get the iron skillet off the gas flame so she could put out the fire and I was afraid she was going to be burned, but somehow she managed to get to it and contain the fire.


My face was blood red with embarrassment as Mrs. Jenkins hurried to leave our smoke filled home. I don’t think it would have been so bad if she hadn’t been my Home Economics teacher. After she left, Mama started to laugh hysterically and as I asked her why she was laughing when our house could have burned down, she said, “Well, at least you learned how to put out a grease fire today and you learned never to leave an iron skillet on a hot stove eye unattended.” I didn’t think it was very funny but I guess Mama was thankful she hadn’t added the chicken just yet. If she’d done that, we wouldn’t have had supper that night.


When we sat down to eat, Mama was telling Daddy all about Mrs. Jenkins visit and as she got to the end of the story, she said, “You should have seen that lady fly out of the house! She must have been so frustrated. I bet she’s never seen a grease fire in all her life and yet she has to teach her students what to do in case they ever have one. I think she got a big ol’ homeschool lesson herself today.”


At that, we all had a good laugh but it took weeks for the smell of smoke to leave our kitchen. I’ll never forget how Mama remained calm that day and how she took care of the fire like it was nothing unusual. That was the day I learned my Mama could teach Mrs. Jenkins a thing or two.
- May 09, 2019