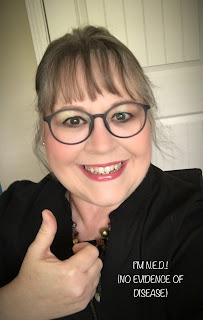 I am an impatient person, always have been, always will be. And while that's not always a good thing, it's the truth. I just hate waiting.

On Tuesday, I spent most of the day at the cancer treatment center. I was scheduled for a biopsy. Dr. H had found an enlarged lymph node along my left clavicle at my last exam. Since that visit, I'd had an ultrasound performed which defined a fairly large node just under my left collar bone. Those findings led the doctor to order an ultrasound-guided biopsy but the thing is, when I went in for the test to be performed, the little radiology tech couldn't find the node! She kept passing the ultrasound wand over and over the area where the node had been. She snapped photos of what she thought might have been the place Dr. H wanted to biopsy. She turned those photos in to the head radiologist for his opinion. She even brought him back into the exam room to talk with me. When he arrived, I didn't know what to think but as a big grin crossed his face, I knew everything was going to be okay.

Although the node wasn't showing up on the ultrasound scan and although no biopsy was performed, Dr. H, along with the radiologist, felt a repeat PET SCAN was due. (I'd had my last scan done in 2015 and I'm sure they felt that 4 years could have led to some notable changes in my body.)

Yesterday, I spent most of the afternoon at the cancer treatment center. First, I was intravenously administered a radioactive tracer. Then it was time to wait. I was told I'd have to wait about an hour for the tracer to course through my system.

After gathering the radioactive vial and other materials, the nurse turned down the lights, brought me a warm blanket, and left the room. I assumed the ambient lighting was to help me relax and possibly even fall asleep, but they didn't know me. I don't nap during the day.

I got up and turned up the lights and began reading a book I'd pilfered from the library on the second floor earlier that day. As I read, I noticed the room was beginning to get colder and colder. Although I had that thin little warmed blanket the nurse had given me earlier, I was freezing! So I got up again and tried to adjust the thermostat in the room but was unable to do so. Apparently, it was controlled elsewhere in the building so I made the best of a bad situation and covered myself from top to bottom with that little blanket.

When the time was up, the nurse came back into the room and told me to empty my bladder. I was so happy to hear her say that! I was about to burst from drinking all the water they'd encouraged during my time there and the coolness of the room exacerbated my feelings of urgency.

After taking care of business, I was taken into the room for the scan. The positron emission tomography scan (PET SCAN) would look at all my bones, tissues and organs. The radioactive tracer would illuminate any trouble spots indicating a probable recurrence of cancer. I was nervous about the test and since I don't do well in confined spaces, I'd taken the anti-anxiety meds the doctor had prescribed for me before being put into the scanning machine. They helped me relax enough to withstand the scan without feeling anxious.

The test was over fairly quickly. I don't think it lasted more than about 15-20 minutes. When the test was over, I asked the tech when I could expect to receive the results. She assured me I'd hear from my oncologist the following day.

All night long I tried my best not to worry. I didn't want to think about the possibility of a recurrence. As I prayed before bed, I told God I'd accept either verdict. If He saw fit for me to go through another round of cancer, so be it. And, if He saw fit to allow me to remain cancer-free, then I'd accept that, too. By coming to terms with whatever God chose to bring my way, I fell asleep peacefully and slept soundly through the night.

I woke up bright and early. From 5:30 a.m. until 12:30 p.m. I waited patiently to hear from the doctor. I sat by the phone in my office expecting it to ring any minute.

When I finally received word that I was still cancer free, I wanted to dance around the room! I was so grateful and so humbled.

In His goodness, God has allowed me to remain cancer free for almost 5 years. I know so many others who've passed away during that time from breast cancer. I have no idea why God's chosen to allow me His favor, but I will gladly accept it. And I'll treasure those three little letters, N.E.D., every day from this day forward.

For those who've never experienced breast cancer, it's hard to explain what living under an umbrella of fear feels like. It's hard to be on constant guard for the most recent results from bloodwork, scans, or other tests. Sometimes, it seems like they'll never end and for most us, even if we're in a state of remission, we'll continue to be under the watchful eye of a doctor for the rest of our lives.

Cancer is a tricky disease. It can pop back up and become active at any time. Many times, a recurrence appears within a few years after the initial diagnosis and other times, it can appear decades later. But for those of us who've had our lives touched by cancer, we have to learn to continue our lives. We can't live in a state of constant fear - that's a very unhealthy place to be. So on this day, I am celebrating! Fear has no power over me!

And one thing I know for sure...God is good, all the time. He's got a plan for my life and I am choosing to walk in it. I will trust Him no matter what because I know He has numbered my days. No one can pluck me out of His MIGHTY, OMNIPOTENT hand.

Celebrate with me, won't you? N.E.D. seems such a tiny little acronym for such a big blessing but I'll take it!