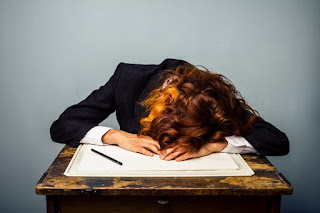 For the past few days, I've had good intentions but you know what they say about good intentions...the path to hell is paved with them. Anyway, it's already the first of February and I should have completed my book by now.

My goal was to have it completed by the end of December 2017. Did that happen? No! Life just got in the way and things happened that were out of my control so I changed my goal. My new goal is to finish by the end of 2018. Will that happen? It remains to be seen, but if I don't make a specific plan it won't.

So today, I committed to writing for a couple of hours each day. I went into my office this morning and thought, "Oh, great! I'm off to a good start. It's only 9:30 a.m. and I have the whole day to write. I turned on my computer, opened up my manuscript and went into the kitchen to pour myself a cup of green tea. The caffeine in the tea should give me an energy boost, right...well, it did. And then my adult ADHD brain kicked in and I ran outside to fill up the bird feeders, then I pruned some bushes. When I came back inside, I realized I hadn't completed my tea, so I gulped down a few sips and opened the dishwasher. After unloading it, I thought I needed to vacuum, so I did. I vacuumed the entire house and as I was doing that, I thought about dinner so I went to the freezer to pull out something to defrost. After doing all of those things, I passed by my paintings that I'd left to dry on the kitchen table. There were still a few damp spots so I decided to wait to put on the acrylic finish.

Heading back to my office, I sat down at my desk and thought, I really should get to writing. As I looked at the clock it was already 12:30! I popped on Facebook for just a few minutes to get caught up on the news and then my daughter started texting. As I read her texts about baby Garrett and his news, I lost track of time.

The file on my computer was still open. It was now 1:00 p.m. and my stomach was growling. Instead of fixing myself a nice lunch, I went into the kitchen and grabbed a protein shake. I could drink that while I worked on my manuscript.

Back at my desk, protein shake in hand, I opened my book manuscript. Instead of picking up where I left off, I thought it wise to reread my writing and make some edits. I scrolled all the way back to my book's introduction and began there. As I read, I was transported in time.

Reliving the past events of my cancer journey wasn't easy. Going through each process step by step was a challenge. I'd forgotten some of the emotions I'd felt back then, now they were fresh in my mind again.

After two hours of reading and editing, I decided to stop. I completed 4 chapters of work and I'm satisfied with that. Tomorrow, I'll try again. This time maybe I won't get sidetracked. Sometimes it's hard to have a creative mind. It seems it's always working, always thinking, always going in fifty million different directions. Now, where is that bungee cord?
- February 01, 2018