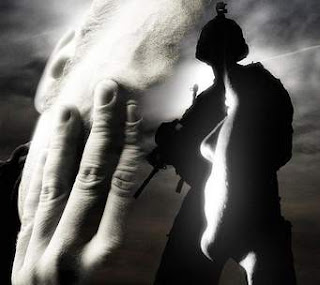 It happened again. I was folding a load of laundry and all of a sudden I was overcome with emotion. I felt the tears welling up inside me and then, with no warning, the dam burst. Sobbing uncontrollably, I tried to complete my task but couldn’t. My husband entered the room and found me curled in a ball on the end of the bed. He put his arm around me and tried to console me as he asked what was wrong. “I don’t know,” I explained through the tears. “I just feel so…so ugly,” I said. I explained I felt I’d lost my femininity. I was feeling fragile and unlovely. Without breasts, I felt less than other women. As I tried to help him understand why I was feeling so distraught, I wondered if I might be experiencing a little touch of PTSD (Post Traumatic Stress Disorder.)

Since surgery, I’d noticed I was extremely sensitive to loud noises. I found myself jumping if a door slammed or some other type of sharp, loud noise occurred. I’d also noticed, in large groups of people, I felt like I was being overly stimulated. I couldn’t focus on multiple conversations occurring at the same time. When out in public, I’d have meltdowns in the most random places and at the most unexpected times. I’d burst into tears for no reason whatsoever. This wasn’t normal. This wasn’t me. But why, two years out from my initial surgery, was I still going through this? I wondered if other breast cancer patients/survivors suffered from these types of symptoms, too.

I’d heard about PTSD in relation to military personnel and how those on the front lines in active duty often came home with some of the same symptoms I’d been experiencing. Their cases were more severe and rightly so. Facing imminent death on a daily basis is certainly traumatic but why would PTSD be so prevalent in the lives of women with breast cancer? As I searched for answers to this question, I came across many articles on the internet. In one article published on Psych Central, I found some interesting information. The article was based on a study done in Germany and stated: “The findings reveal that receiving a breast cancer diagnosis often has a stronger psychological impact than experiencing other types of severe trauma, such as a serious accident or a violent assault. Over half of the breast cancer patients in the study still suffered from at least one symptom of PTSD one year after diagnosis. That the high level of stress should persist for such a long time is particularly striking,” said lead researcher Dr. Kerstin Hermelink of the Breast Cancer Center in the Department of Gynecology and Obstetrics at the LMU Medical Center. Indeed, the severity of the psychological and emotional impact of the cancer diagnosis is underlined by another result reported in the study. When patients who had already had a traumatic experience, such as a serious accident or a violent assault, prior to the development of malignancy, some 40 percent of them rated having breast cancer as the more severe traumatic event.”

Just knowing doctors consider PTSD to be a very real malady among breast cancer patients/survivors made me feel so much better. At least I knew I wasn’t alone. But PTSD comes with a certain type of shame and stigma, at least for women who’ve battled breast cancer. Do we really have a right to say we have PTSD? Is it okay to chalk those feelings of fear, insecurity, jumpiness, inadequacy, helplessness, and isolation up to the aftermath of a cancer experience? I think it is although some may not agree with me. PTSD isn’t a condition validated only by those who’ve faced mortar rounds and gunfire. Breast cancer immediately places women into a battle they never intended on fighting. We are ill equipped to march forward onto the front lines of our own personal war and when we think we’ve completed the battle…we find it isn’t over. PTSD plans a sneak attack. It springs up and catches us off guard.

I haven’t found a way to completely combat PTSD in my life but I’m working on it. When I start to feel overcome with emotion or feel overly stressed in any situation, I politely recuse myself to a more serene location. By learning to set some boundaries in my life, I can help keep the PTSD under control.

There’s no way to know when or if PTSD might affect a woman with breast cancer. Each case is different. Some women may never experience any dealings with PTSD while others find it debilitates their lives. I’m hoping the PTSD in my life will ease with time or in a best case scenario, completely disappear. It’s challenging to constantly be on guard against an invisible foe. Sometimes I feel like cancer is the gift that keeps on giving but the gifts aren’t always ones I welcome.