Time to visit my old friend, Piedmont Hospital again. Today it will be for a complete head to toe bone scan. I've been having a lot of spine and hip pain lately. The oncologist wants to do some testing to make sure the cancer hasn't returned. It's funny how cancer always seems to be lurking in the shadows ready to jump out at me at any given moment. I'm always on guard and I don't like feeling that way. I wonder if other cancer patients feel the same way. It's an eerie feeling, one you can't shake.


At 2:00 p.m. I went to the Nuclear Imaging Center for my injection of radioactive phosphorous fluid. The injection is housed in a lead casing to protect the workers. When the radiology tech came out with it. My eyes immediately went to the radioactive symbol. I remember seeing that same symbol on the fall out shelter signs in elementary school in the early 60s. I thought of Hiroshima and Nagasaki. The images of children on the front page cover of Time magazine with their skin hanging off their bones was fresh in my memory...nuclear fall out, radiation sickness...uggghhh! Shaking my head, I made myself jump back to reality as the technician was applying the alcohol swab to cleanse my arm. I watched him as he carefully wiped my arm and let it dry for a few minutes. There on the counter beside me lay the lead tube containing the injection. It looked ominous.

The tech opened up the lead tube and readied my arm to receive the injection. A bright orange tourniquet was placed above the crease in my elbow. (I'd reminded him earlier it was important for him to only use my left arm because of the lymphedema.) I prayed he'd find the vein quickly. For some reason I'm the one with the tricky veins and usually end up being poked and prodded until a willing vein jumps up. I watched as he overshot the vein and had to draw the needle back to make contact. As he was working, he said he'd been doing this for 23 years. He was a medic in the U.S. Army. I thanked him for his service as he finally made contact. Blood leaked out of my vein onto my skin and he quickly swabbed it up and depressed the plunger on the syringe. I watched as the radioactive liquid swirled into my vein. I was instructed to leave the hospital and drink large quantities of water.

At 5:00 p.m. I returned to the hospital. I'd taken an anti anxiety pill around 4 because I knew it was going to be challenging to be in that tight space for over an hour. I hated being claustrophobic. (I'd never suffered from that in the past, only recently after having been trapped in an elevator for several hours.) When I lay down on the scanner table, the tech took a draw sheet and wrapped it over me tying up my arms tightly. I didn't like the feeling of being restrained. The tech told me it was to keep my arms in proper position for the scan. I closed my eyes and tried to relax as the heavy equipment lowered over my body. I was tempted to look but didn't want to because I knew the machinery was just an inch or two from my face. Using my imagination, I placed myself on the beach. I began listening for the shore birds and lapping water. I felt myself melting into the imagery and almost falling asleep. Before I knew it, the test was complete and the tech was raising the scanner as I moved out from under it. 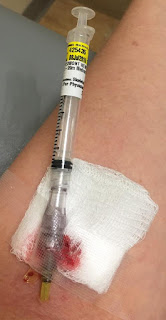 I sat on the edge of the scanner bed and got my bearings. The tech asked if I had pain in my hip, leg, and foot. I wondered why he was asking this. Did he see something concerning in those areas? I had already mentioned my spine and hip pain but had not mentioned the shin and foot pain. I knew he was forbidden to share any medical information with me because the radiologist had yet to read the films. I dismissed his questions and left for home.

I'll have to wait until Monday or Tuesday for the results of the scan. I hate waiting. I'm concerned because I don't want anything to show up but then again, if there's something that needs to be addressed, I'd rather it show up now and know we can get on it right away. If cancer is evident, I'm going to have to do a lot of praying about my treatment options. I don't want to have to do chemo but I will if I have to. I'm going to rely heavily on my oncologist's opinion.

Tomorrow I celebrate 2 years of being in remission. I am excited about that. I didn't really celebrate my first year of being in remission because I was afraid to celebrate. It was too soon. But this year, I'm ready. We have a family dinner planned and then will come back to the house for dessert. I'm so thankful to still be here.