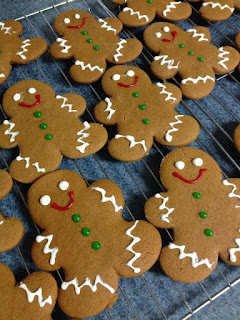 Yesterday, my granddaughter, Heather, came over to bake cookies with me. For the past several years, I've had the honor of baking with her while her Mommy finishes up some last-minute Christmas shopping. It's a win win for all of us. I get to spend precious one on one time with Heather and Laura gets to have some much-needed Mommy time.

This year was a little different. Heather's gotten older and is able to do a lot more than she'd been able to do in years past. Since she could read well and follow instructions, I decided to let her do as much as she could.

We started out by pulling out ingredients. As I'd call out what we needed, she'd run to the pantry and look for the items. When she couldn't find something, I'd give her clues to help her located each one. After they were all assembled on the kitchen island, I pulled out a new Christmas apron I'd bought for each of us, and we put them on. The bright red aprons would protect our clothing from flour and other ingredients if we decided to get a little messy.

Pulling out a large mixing bowl and wooden spoon, I gave Heather the recipe and we walked through it step by step. As she read down the instructions, we talked about what we'd use to carry out each task. I told her we'd need measuring spoons, measuring cups, a rolling pin, and cookie cutters to start with and then later on, we'd need decorating bags and various tips as well as royal icing.

She was so excited as we began. Carefully, I helped her measure each ingredient and place it into the bowl. She was so tickled to use a little baking set Laura had purchased for her. There were multicolored measuring spoons, a tiny scraper, a little whisk, and a miniature rolling pin.

When we had all the ingredients in the bowl, I pulled out the electric mixer and turned it on. I let her hold it with me for a few minutes so she could get used to how it felt and then, I let her hold it on her own. You should have seen her eyes get huge as the mixer wobbled in the bowl and she tried to control it! Thankfully, she was brave enough to hold on tight.

We got the dough all mixed up and popped it in the fridge to chill. As it was chilling, we played a couple of games of Jenga, listened to some Christmas music, and she rewatched a quick children's video, Noel, the Happy Christmas Ornament. 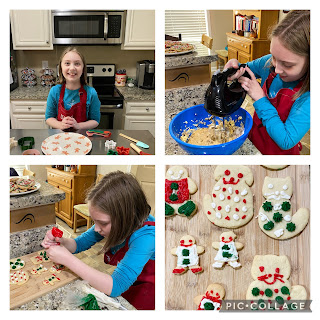 About an hour later, we pulled the dough out of the fridge and got busy rolling out the dough. Heather tried her best with that little rolling pin, but soon realized it wasn't doing the job well enough. She found my large, marble rolling pin to be much more efficient.

We had such fun cutting out cat, dog, snowflake, gingerbread men and women, and other cute critters.

I manned the oven putting cookies in and taking them out as they were ready while Heather worked on cutting more cookies. We made a great team and before we knew it, the time had flown!

Stopping for a quick bite of lunch, we laughed over the mess we'd made in the kitchen. Sprinkles of flour were on the floor and the counters were covered in bits of cookie dough. Heather was worried about it and I told her we'd clean it up later. "It's all part of the fun," I told her.

When the cookies had cooled, I pulled out the royal icing I'd prepared the night before. I'd made a bag with Christmas colors - red, green, and white. I affixed various tips on the bags and showed Heather how to hold and use them. Then, the real fun began.

Intently, she worked to decorate each cookie. I loved watching her facial expressions as she worked and captured her with my cell phone camera.

Laura joined in the fun and decorated a cookie of her own then showed Heather how to bite the head off! 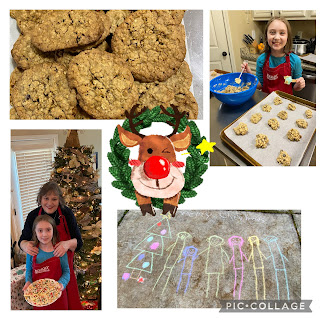 I love making special memories with the grandchildren. I hope they'll think back on those special times as they grow older and remember the love that accompanied each moment we shared together.

For me, being a grandparent means being able to share in a child's learning and growing process. We miss so much of the day to day growing up years, so when we have a chance to capture just a few of the minutes, it's a very special gift.