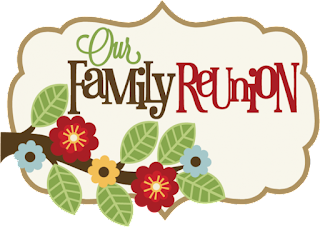 Many years ago, I decided to host a family reunion for my Dad's side of the family. We rarely got together, and I thought it would be a good idea, so I began putting things together.

I talked with my Mother and Sister, asking for their thoughts on the idea. They both thought it would be nice and so I moved forward.

After drafting an invitation, I set a date and circled it on my calendar. I was excited to see cousins I hadn't seen in years.

For days, I cleaned every inch of my house (which was normally very clean anyway.) I made sure to dust the ceiling fans and make sure every bathroom sparkled. I wanted my guests to feel free to roam through my entire house, after all, there would be almost 30 people coming!

The day before the event, I went shopping and began to prepare the food. There was a lot to do in such a short amount of time, but with the help of my daughters, things began to fall into place.

My refrigerator was filled with casseroles that I'd just pop into the oven hours before the guests began to arrive. Coolers were filled with ice and canned drinks. Tea had been made; tables had been set up. My home was beginning to look like an event hall, and I was happy.

Hospitality isn't a gift I've ever claimed to have. It's one I've struggled with. I don't do well with the sitting and visiting part, but since the Bible says to "practice hospitality," I do my best.

One by one, family members started to arrive. I welcomed them one by one and did my best to make them feel at home.

Since I had things in the oven, I couldn't stay in the living room long. I had to keep going into the kitchen to make sure nothing was burning. And since several family members were already there, I figured they could talk amongst themselves while I busied myself attending to details. I was in full on "Martha” mode.

When everyone had arrived, I showed them the varied tables set up for dining. They could choose where they wanted to sit and I had plenty of room. The older relatives, including my parents, chose to sit in the formal dining room. The kids sat at a card table in the living room, while most of the other family members scattered between my kitchen table and a long folding table set up in my formal living room. After everyone had their place, I asked people to take their plates and begin moving through the kitchen buffet style.

As people filled their plates, I moved among them asking what they'd like to drink and asking if anyone needed anything. There were so many of them and only one of me!

Soon, pleasant chatter filled my home, and I began the task of going from one room to another asking if anyone needed help. Some needed salt or a drink refill. I happily obliged.

I don't know how long I served, but time was ticking by.

On my next round through the formal living room, my cousin, Steve, patted the seat next to him and said, "Come sit down and visit with us." Throwing my head back in laughter, I chortled, "I'd like to, but I've got to keep moving! There's so much to do." He didn't press me, and I continued my busy work.

The reunion was a huge success and my Daddy enjoyed it so much. That was my main goal, to bless him.

Today, as I was studying about the the story of Martha, Mary, and Lazarus again, God hit me between the eyes. "Remember the reunion when Steve asked you to sit and visit?" "Yes, Lord, I do." "You didn't. You should have. Why didn't you?" " I was so busy. I didn't have time." "You should have made time. You would have been blessed." "Ouch!" Of course, that's my conversation with the Lord in my mind, and some of the words are very different, but it's the jest of it. That's when I realized, I'd been a Martha.

I'd always wondered why Jesus chided Martha for her busy-ness and had pointed out that Mary chose the better part. I always thought Martha was doing a good thing, making sure everything was just so, but Jesus knew better. Martha did use her gift of service to please others but in so doing, she missed being able to sit and visit with the guests. Most of all, she missed being in the presence of Jesus and hearing Him speak.

I missed visiting with my cousins. I missed the conversations that held years of updates, but by the time the reunion was over, it was too late to visit with anyone.

My kitchen had been a beehive of activity and I'd been the queen bee but during that time, the "hive" had been busy laughing, loving, and lingering. I'd missed it all!

And just a month ago, I missed another opportunity as my youngest sister and a cousin planned another family reunion. I'd had a scheduling conflict and had to choose between two events. Instead of choosing to reschedule an anniversary/birthday trip, I opted to skip the family reunion thinking there'd be time to do another one in the near future, but that may never happen.

As God reminded me of those lost opportunities today, I wept bitter tears of remorse. I wanted a do over. But now, many of my family members are no longer here. They've already gone on to heaven.

One thing I can do though is make time now.

I won't ever forget the lesson I learned from that big mistake. I've asked God to help me be more Mary-like. Who cares if the dishes are in the sink or on the counter? It's more important to be present with the people I love and care about. Time is short and I won't make that mistake again.