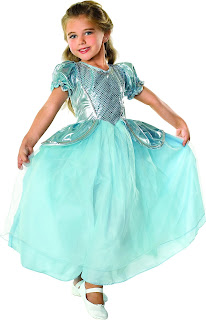 A few weeks ago, I had the wild idea to start a dress up box for my young granddaughter, Heather. I'd remembered how much her mother, my daughter, Laura, had loved dressing up when she was about the same age.

As I began my selections for the dress up box, I remembered most little girls I knew loved shiny things so I searched for those specific items.

On a trip to our local Goodwill, I found a beautiful blue gown with a white net overlay. The white netting sparkled with silver glitter and reminded me of a fairy princess so I bought it. I also found a pair of silver shoes and a beautiful pink tutu.

Thinking those would be good first additions to Heather's dress up box, I brought them home and did what I always do whenever I make a purchase from Goodwill - I immediately wash the item.

Dropping the princess dress and the tutu in with my regular load of laundry, I couldn't wait for them to come out so I could pop them in the dryer and then into her box.

I went about my other chores for the day as the clothes were washing.

About thirty minutes later, the chime on my washer indicated the load was done so I went to transfer the clothes into the dryer.

When I opened the lid to the washer, I was surprised to see sparkly silver glitter on all of our clothing. "Oh well, I thought. It will come off in the dryer."

Gathering the wet clothes, I chucked them into the dryer and turned it on heading back into the kitchen to unload the dishwasher.

When the signal alerted me to the fact that the clothes were done drying, I went to take them out.

After withdrawing a couple of items from the dryer, I found the glitter had not come off. All of the clothes were still covered in silver sparkles. This was not what I'd expected!

I took all the clothes and put them back into the wash and set it to wash on a longer cycle and added an extra rinse cycle, too.

Once again, about thirty minutes later, the washer signaled the cycle was complete. This time, when I transferred the clothes to the dryer, they looked okay.

When they were dry, I took the large load of clothes to my bed and folded them. As I began to put them away, I was thankful I'd found some cute things for the dress up box.

This morning, as I was preparing for my shower, I gathered my clothing and took it into the bathroom. After placing the clothes on the counter, I turned on the shower and stepped in.

When my shower was complete and I was toweled off, I reached for my clothing to get dressed. As I grabbed my underwear, I noticed they were covered in silvery sparkles! "For heaven's sake!" I thought and then shook my head. I was just going to wear the sparkly drawers anyway.

As I pulled the panties up, I was reminded of a funny story a friend had told me years ago. She'd had her elderly mother move in with her when the Mom's health was failing. She wanted to give her the very best care she could and that means she'd oversee all of her health needs. She'd scheduled an appointment for her mother to have a pap smear, even though the mother protested at the need for the test.

On the day of the test, the daughter encouraged her Mom to take a shower beforehand.

Finally, it was time for the duo to head out for the doctor's office.

When the Mom's name was called for the appointment, the daughter decided to give her Mom privacy and not accompany her into the exam room.

On the exam table, as the woman prepared for the pap smear by spreading her legs apart, the doctor exclaimed, "My, Mrs. Weaver, don't you look fancy today."

The test was performed and when Mrs. Weaver went back out to the waiting room to meet up with her daughter, she said, "I don't know what is wrong with that doctor. He kept on telling me I sure did look fancy today and I have no idea why. I look like I do every other day."

Walking to the car, the daughter tried to get to the bottom of the incident. She asked her Mom if she'd done anything special to prepare for the exam. Mrs. Weaver said, "I just took a shower and used that body wash you have in my shower and then I used some of that hairspray you have underneath the counter."

Thinking for a moment, the daughter said to her mother, "Mom, I don't use hairspray." The Mom said, "Well, there was some under there and I thought I might better use some."

When they got home, the daughter went into the bathroom and opened the cabinet. Underneath the counter was a can of sparkly glitter hairspray her teenage daughter had used the year before for a party on Halloween. All of a sudden it clicked! The doctor had said Mrs. Weaver sure looked fancy because Mrs. Weaver had sprayed the glittery spray in her nether regions!

All of a sudden, she burst out laughing as she thought about the doctor getting a bird's eye view of her mother's hooha covered in silvery glitter.

I never thought the glitter from the princess dress would stick so well to my undies, but it sure did. I don't think I'll be buying any more glittery things for the dress up box any time soon and I hope my husband doesn't notice the sparkles on my undies as I undress tonight. If he does, I think I'll have some (in the voice of Ricky Ricardo) 'splaining to do. 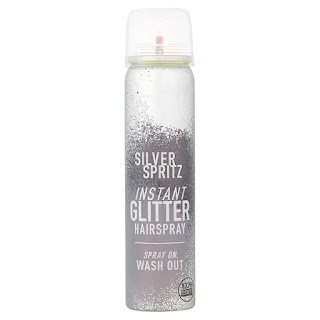 Clinical trials are they worth it?

I have a friend who recently lost her husband to pancreatic cancer. Over the past year, I followed each event on his health care journey do...