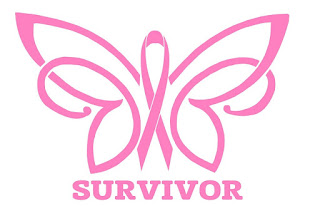 In just a few more days, I'll celebrate my fourth cancerversary! It's hard to believe 4 years have gone by so quickly since the day I found out I had cancer. Sometimes, it seems another lifetime ago and sometimes it seems like just yesterday. More than anything in the world, I'm just thankful to still be alive.

The day I received my diagnosis, it felt like I'd been given a death sentence. It was almost as if I was handed a piece of parchment paper with my expiration date printed across it boldly in bloody red letters. As the paper was thrust into my hand, I didn't want to receive it. Though that didn't actually happen, it sure felt like it did. As I listened carefully to the voice on the other end of the telephone, the words traveled across time and emblazoned themselves upon my heart. I had cancer and not only did I have cancer, I had breast cancer.

Since that life changing day, I've been on an emotional roller-coaster. Some days have been really good and others have been extremely challenging. Not only has my mind been battered by an arsenal of thoughts and feelings, my body has also been assaulted. Test after test for the past four years have been on the lookout for any rogue cancer cells that might be wandering through my body. Thankfully none have been found, although a couple of years ago there was a suspicious mass on my spine. It turned out to be a hemangioma,  a benign tumor formed by a collection of excess blood vessels. I was extremely grateful.

I've had to work hard at learning how to return to normal since then. You'd think it would have been easy but the trauma of cancer changes things in a big way. Now I suffer from self esteem issues, severe chronic fatigue, residual pain, and the side effects of lymphedema. Each day I have to choose to push through. Some days are easier than others, but I do it anyway.